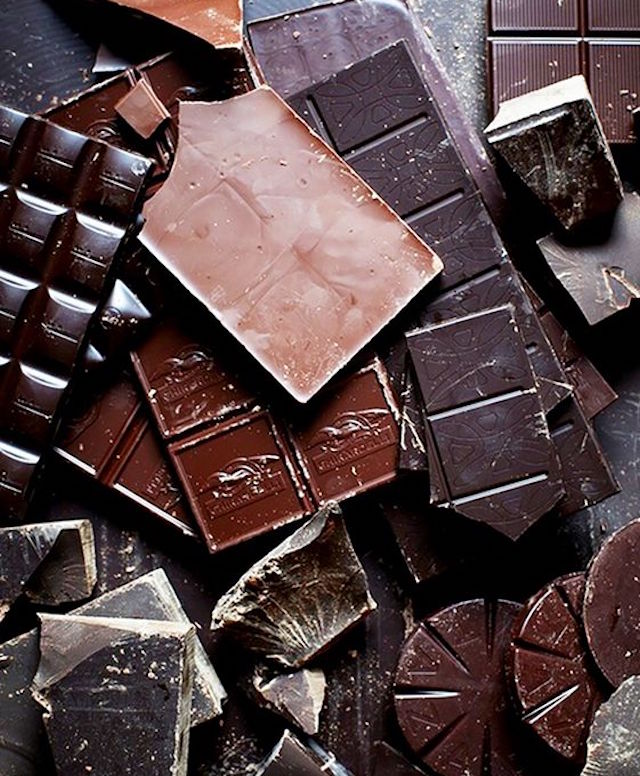 Eating chocolate is good for you!

Yes, scientists agree that eating chocolate – in reasonable amounts – makes you feel emotionally better and so improves the smooth running of your body’s endorphins. It even protects against heart disease. Happy happy news, and here’s some more…
Chocolate makes you live longer Researchers at Harvard University in the U.S. studied 8,000 men for 65 years and found that those who ate modest amounts of chocolate up to three times a month, lived almost a year longer than those who didn’t eat any. They concluded that this is likely to be due to the fact that cocoa contains antioxidants called polyphenols, also found in red wine, which prevent the oxidation of harmful cholesterol. Antioxidants are also known to protect against cancer.
Chocolate is good for stress This is thought to be because it contains valeric acid, which is a relaxant and tranquilliser. Also, the sugar in chocolate may reduce stress – sugar has been shown to have a calming and pain-relieving effect on babies and animals because sweet tastes activate the opiate-like substances in our brain.
Chocolate makes us feel better There are a number of scientific reasons for this. The smell of chocolate has been found to slow down brain waves, making us feel calm. Most of the time our brains are dominated by beta waves – normal waking frequency. When our brain activity slows to alpha waves, we experience a pleasant feeling of calm but alert relaxation. Also, because most of us find eating chocolate so pleasurable, we release
endorphins (also released during sex) in the brain. These have similar pharmacological actions as morphine, acting as pain-relievers and giving us a sense of wellbeing.
Chocolate does not cause breakouts Although many teenagers blame chocolate for their acne, there’s no scientific data to confirm this link. Scientists at Missouri University even gave spot-prone subjects chocolate to eat and observed their skin for the next week – with no effect.
Chocolate could boost concentration This can occur, for example, if you eat it mid-afternoon, when blood sugar levels get a bit low. Chocolate has a reasonably low glycaemic index (GI), which means it gives long-lasting energy because it doesn’t raise blood sugar too quickly. For example, a typical bar of chocolate has a GI of 70 compared with 73 for a bowl of cornflakes. This means a chocolate bar will keep you going for
longer. Also, chocolate is a good source of chromium, which helps control blood sugar because it is involved in making glucose available in the body.
Chocolate helps us digest milk This means it is good for those who are lactose-intolerant. Researchers at Rhode Island University have shown that cocoa stimulates
activity of the enzyme lactase in the intestine. We need this to digest lactose, the sugar found in milk. Lactose-intolerant patients showed a reduction in bloating, cramping and
diarrhoea when one-and-a-half teaspoons of cocoa were added to a cup of milk.
Chocolate boosts the appetite This could be because it contains cannabinoid-like substances that are known to affect the hypothalamus, the part of the brain that controls hunger. This isn’t ideal if you’re on a diet but, for those who need to put on weight or who are convalescing, chocolate could be just what you need to help get your appetite back.
Chocolate can make you more alert It contains a stimulant called theobromine, a caffeine-like substance that is thought to make us more alert. But theobromine doesn’t have the side-effect of giving us the jitters, like caffeine, and chocolate contains only minute amounts of caffeine – a mug of coffee has about 85mg compared with just 1mg in three squares of chocolate.
Chocolate is nutritious A 50g bar of plain chocolate contains 1.2mg of iron, and 45mg of magnesium. And milk chocolate is a reasonable source of calcium – a 50g bar contains 110mg. However, we’d need to eat about seven bars to get the recommended daily allowances of these minerals.
You’re welcome! xxx
{Source: Daily Mail / Pic: Byrdie}